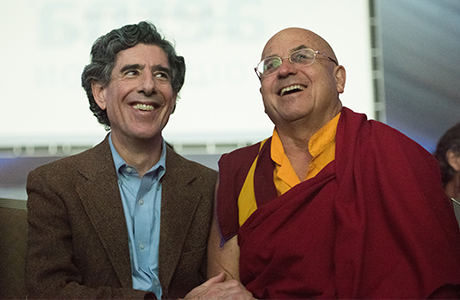 Transforming the Mind:
Scientific and Buddhist Perspectives On the Science of Well-Being
— A Panel Discussion With Drs. Matthieu Ricard, Richard Davidson, Tania Singer and Barry Kerzin

This discussion is a unique opportunity to learn from some of the world’s leading experts on meditation and the science of transforming the mind. The work of these individuals has shaped the way we view the mind, brain, and our capacity to cultivate awareness, compassion, and wisdom. The evening will include a panel discussion between Drs. Matthieu Ricard, Richard Davidson, Tania Singer and Barry Kerzin, and an opportunity for the audience to ask questions.

The base level fee makes these events possible. If this fee creates an obstacle to attending this event, please contact us.

*Half of the proceeds for this event will benefit Karuna-Shechen, a charitable organization founded by Matthieu Ricard to benefit under-served people of India, Nepal and Tibet.

Cancellation Policy:
For cancellations within one week of the event — after October 16 — there will be a $15 administration fee.

Matthieu Ricard moved to the Himalayan region after completing a Ph.D. degree in cell genetics in 1972. He has lived there ever since, devoting his life to the practice of meditation and to serving others through his humanitarian projects. Mr. Ricard has become one of the most well-known and respected Buddhist teachers of modern times, and has served as the French translator for His Holiness the Dalai Lama since 1989.

Matthieu Ricard is also an international best-selling author, and a celebrated speaker and photographer. His books and speeches on happiness and altruism have been read and viewed by millions of people worldwide, and his photography of Himalayan spiritual masters, landscapes and people have been exhibited in museums and art galleries worldwide. Mr. Ricard maintains an ongoing engagement with the scientific community through his work with the Mind and Life institute and by contributing to research and publications on the effect of meditation on the brain.

All proceeds from Matthieu’s books, photographs and events are donated to Karuna-Shechen, a humanitarian organization he created to develop educational, medical and social projects for the underprivileged people of India, Nepal and Tibet.

Richard J. Davidson, PhD is a renowned neuroscientist and one of the world’s leading experts on the impact of contemplative practices, such as meditation, on the brain. He is the founder and chair of the Center for Investigating Healthy Minds at the University of Wisconsin-Madison. He is perhaps best known for his groundbreaking work in studying emotion and the brain. A friend and confidante of the Dalai Lama, he is a highly sought after expert and speaker internationally. Time magazine named him one of the most influential people in the world in 2006.

Dr. Tania Singer is a renowned social neuroscientist and a world expert on empathy, whose work focuses on mental training, neural plasticity and human social behavior using an interdisciplinary approach. She is the director of the Max Planck Institute for Human Cognitive and Brain Sciences in Leipzig, Germany and a board member of the Mind & Life Institute. Dr. Singer was named one of the fifty most influential women in the German economy.

Dr. Barry Kerzin is an ordained Buddhist monk and serves as a personal physician for the Dalai Lama. He teaches about the interface between Buddhism and modern medical science, emphasizing the spiritual and health benefits of meditation and compassion. Dr. Kerzin founded the Altruism in Medicine Institute and is a fellow of the Mind & Life Institute.

To sign up for email communications from Tergar Meditation Community, please enter your email address below.

This site uses cookies. By continuing to browse the site, you are agreeing to our use of cookies to improve and personalize our services and for social activity. Read our updated privacy policy for more about what we do with your data, as well as your rights and choices – including how to manage cookies. By clicking the “Accept” button below, you agree to our policies. Click the "Change settings" button to decide which cookies you want to allow. Click the “Read More” button to learn about our privacy and cookie policies.
Accept
Read more
Change Settings
Cookie Box Settings