The first transmission of Buddhism to Tibet was initiated by a series of Tibetan monarchs that ruled the land at the height of its prestige and influence—in the seventh, eighth, and ninth centuries CE. King Songtsen Gampo was the first of these rulers. In addition to building numerous Buddhist temples, Songtsen Gampo formed links with the Buddhist cultures that bordered Tibet through his marriages to Chinese and Nepali princesses. Perhaps the most important development during his reign, however, was the creation of the Tibetan alphabet. In the middle of the seventh century, the king sent one of his ministers, Tönmi Sambhota, to India to study the Sanskrit language. The alphabet system created by Sambhota later allowed for the translation of the entire Buddhist canon into the Tibetan language and also served to bridge the geographic and cultural chasms that existed in Tibet at the time.

Though Songtsen Gampo is often credited with beginning the process of bringing Buddhism to Tibet, it was during the reign of his descendent, King Trisong Deutsen, that the Buddha’s teachings truly took root in Tibetan soil. King Trisong Deutsen, who ruled the country in the eighth and ninth centuries and vastly expanded the Tibetan territory with fierce military campaigns, undertook the arduous tasks of building a major monastic center, translating the Buddhist canon, and inviting teachers from India to transmit the Buddha’s teachings. The king also invited the abbot Shantarakshita and tantric adept Padmasambhava from India. Together, these two masters worked under the king’s patronage to establish Samye, Tibet’s first monastery. Trisong Deutsen’s work was later continued by his grandson, King Ralpachen, the third of Tibet’s three “Dharma Kings.” Along with many other scholars and translators, these monarchs inaugurated a tradition of Buddhist study and practice that continues to this day.

After this flourishing of Buddhist activity during the seventh to ninth centuries, the spread of Buddhism suffered a major setback at the hands of Langdarma, the brother of King Ralpachen. Langdarma was bitterly opposed to the spread of Buddhism, which he saw as a threat to the indigenous Bön tradition. During his short reign, Langdarma worked to undo the efforts of his predecessors. His violent persecution dismantled the community of ordained monks and nuns—nearly destroying Tibet’s fledgling Buddhist community—and plunged the country into a period of political and cultural fragmentation.

Buddhism was not entirely wiped out during this dark period, however. While Langdarma and his cohorts decimated most of the monastic community, a few monks escaped to Amdo in northeastern Tibet, where they preserved the lineage of monastic ordination. The community of lay practitioners survived as well, and many tantric lineages that were transmitted by Padmasambhava and other Buddhist masters continued to be taught and practiced in secret. Thus, despite the great upheavals that took place in the ninth century, the work of Songtsen Gampo, Trisong Deutsen, and Ralpachen made a lasting impact in Tibet. The lineages that stem from this first spreading of Buddhism to Tibet came to be known as the Nyingma, or Ancient School.

The Nyingma tradition holds unique teachings that are not found in other lineages of Tibetan Buddhism. Among its distinct teachings are the Tantra of the Secret Essence and the Great Perfection. In the Nyingma school, the Tantra of the Secret Essence is regarded as the most significant work on Buddhist tantra, a form of spiritual practice that stresses using all facets of life as avenues to awakening. The teachings of this text present the main principles of tantric practice.

Despite the renown of the Tantra of the Secret Essence, it is the Great Perfection, or Dzogchen, that is the hallmark of the Nyingma lineage. Though the term “Great Perfection” can be used to refer to the fundamental nature of reality as well as the state of buddhahood, it most commonly refers to a continually evolving set of spiritual instructions and the lineage of enlightened beings who have mastered these teachings and passed them down through the ages. This radically direct approach points out the mind’s fundamental nature of luminous purity. According to its teachings, enlightenment is not a distant goal to strive toward, but an immanent reality that must be recognized in the present moment. Effort and agendas only serve to obscure the true nature of mind. Once this nature has been recognized, however, problems and negativity automatically dissolve, leaving the open space of pure awareness, in which the qualities of enlightenment spontaneously unfold. 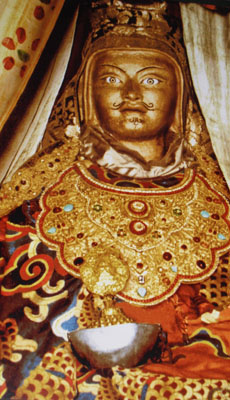 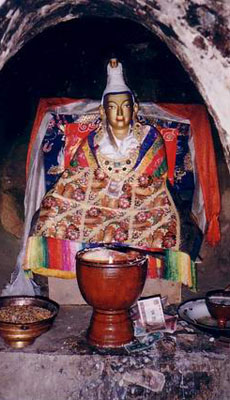