The teachings of the Kagyu lineage have been passed down for nearly a thousand years within Tibet. As one of Tibetan Buddhism’s four main lineages, the Kagyu School is especially known for its profound meditative practices, its tradition of strict retreat, and the countless awakened individuals it has produced.

The teachings of the Kagyu lineage stretch back to ancient India, where the accomplished yogi Tilopa received transmissions from the primordial buddha Vajradhara. Tilopa gave these teachings to the great scholar Naropa, abbot of the famed Nalanda Monastery. In the 11th century, the great Tibetan translator Marpa made the first of three trips to India, where he met and studied with Naropa. Marpa then brought these teachings back to Tibet and eventually transmitted the lineage to Milarepa, his most important student, who practiced the teachings until he attained enlightenment. Milarepa, in turn, passed the lineage to Rechungpa and Gampopa.

Today, the most well-known Kagyu lineages are those that stem from Gampopa, one of Milarepa’s two main disciples. Gampopa’s early training included extensive study and practice in the Kadam lineage founded by Atisha. Later in life, he thoroughly practiced and mastered the teachings he received from Milarepa. Gampopa combined the teachings of these two lineages and passed on what he had learned to his students. This union of the Kadampa and Kagyu transmissions was Gampopa’s unique contribution to the Kagyu school. Gampopa had a number of noteworthy disciples, some of whom founded their own lineages. Further branch lineages were established by later students. Collectively, all these lineages downstream from Gampopa are referred to as the Takpo Kagyu. These include the Karma Kagyu founded by the 1st Karmapa, the Drukpa Kagyu founded by Lingje Repa, and the Drikung Kagyu founded by Jigten Sumgon.

One of Gampopa’s most important and influential disciples was Dusum Khyenpa, the 1st Karmapa. This master founded Tsurphu Monastery in central Tibet and became the head of the Karma Kagyu lineage, also known as the Karma Kamtsang. The successive incarnations of the Karmapa have maintained this lineage over the centuries, spawning an endless stream of enlightened saints and learned scholars — the oldest such line of recognized reincarnate lamas in Tibet.

Practice in the Kagyu School

Kagyu practitioners typically begin by practicing the outer and inner preliminary practices, called ngöndro in Tibetan. These practices include a series of contemplative exercises that help to turn the mind away from the mundane concerns of one’s present life and toward the attainment of liberation from suffering and ultimate enlightenment. The most common form these contemplations take are the “four thoughts that change the mind”: 1) the preciousness of human life, 2) death and impermanence, 3) the suffering of samsara, and 4) the principle of karma. These contemplations comprise the outer preliminary practices.

The inner preliminary practices build upon first set of practices by deepening the student’s commitment to the spiritual path, expanding his or her motivation, removing obstacles, creating positive conditions for practice, and receiving the blessings of the lineage. Respectively, the practices that accomplish these goals are 1) refuge, prostrations, and bodhichitta, 2) Vajrasattva practice, 3) mandala offering, and 4) guru yoga. These are also referred to as the 4 x 100,000, due to the number of times the student must repeat certain elements of the practice. Once the preliminaries have been completed, the student will often move on to sadhana practices, which employ visualization, mantra recitation, and other elements to transform ordinary, impure perception into a more refined, enlightened view of reality. The fruitional practices of the Kagyu tradition are twofold. In the first set of practices—the path of skillful means—the meditator learns to harness the power of the subtle energies present in the body through a series of practices known as the Six Yogas of Naropa. The second form of practice is referred to as the path of liberation. This path contains the teachings of Mahamudra, where the student is first introduced to, and then familiarizes herself with, the nature of mind. 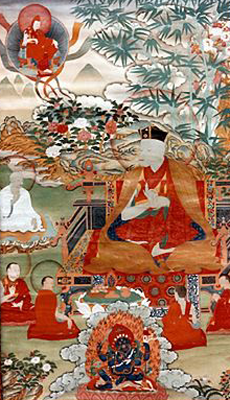 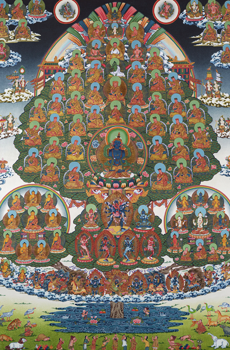 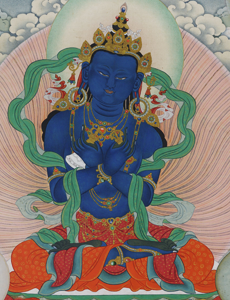