In his approach to teaching meditation, Mingyur Rinpoche integrates traditional Buddhist practice and philosophy with the current scientific understanding of the mind and mental health – making the practice of meditation relevant and accessible to students around the world.

Mingyur Rinpoche is a world-renowned meditation teacher with personal experience of anxiety and panic attacks, which he suffered from throughout his childhood and into his teenage years, when he learned to transform his panic through meditation. Born in Nepal in 1975, Mingyur Rinpoche began to study meditation as a young boy with his father, Tulku Urgyen Rinpoche, himself a well-respected Buddhist teacher. As a child he became interested in contemporary science through conversations with scientists who were visiting his father, and as he grew older he began to collaborate with neuroscientists and psychologists, including Richard Davidson and Antoine Lutz at the University of Wisconsin, on research projects that study the effects of meditation on the brain and the mind.

Mingyur Rinpoche’s first book, The Joy of Living: Unlocking the Secret and Science of Happiness, debuted on the New York Times bestseller list and has been translated into over twenty languages. His second book, Joyful Wisdom: Embracing Change and Finding Freedom, explores how difficult emotions and challenging life situations can be used as stepping stones to discover joy and freedom. In his most recent book, In Love with the World, Mingyur Rinpoche shares how his meditation practice sustained him when he left his monastery to wander through India and the powerfully transformative insights he gained from the near-death experience he had at the beginning of his journey. Mingyur Rinpoche recently appeared in the Netflix series The Mind, Explained, in an episode about the benefits of mindfulness.

As the head of the Tergar Meditation Community, Mingyur Rinpoche supports groups of students in more than thirty countries, leading workshops around the world for new and returning students every year. 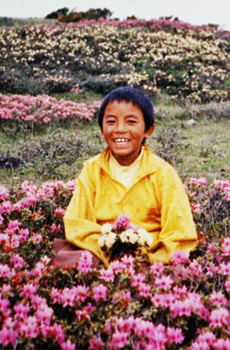