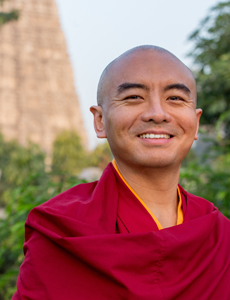 Meditation and the Science of Human Flourishing
With Yongey Mingyur Rinpoche and Richard Davidson, Ph.D
Co-sponsored by Tergar International and
The Center for Compassion and Altruism Research and Education
Stanford, California, USA

Can we cultivate well-being in the same way that we can train our bodies to be healthier and more resilient? If so, how might we use the practice of meditation to experience equanimity, to open our hearts fully to others, and to cultivate insight and wisdom? In this workshop, two world-renowned experts, Yongey Mingyur Rinpoche and Richard J. Davidson, PhD, will share their perspectives and insights on meditation and the cultivation of well-being. This workshop will include teachings on simple meditation practices that help us to recognize and nurture the mind’s natural qualities of awareness, compassion, and wisdom, as well as discussions on the practice and science of self-transformation and the cultivation of well-being. There will also be short periods of guided meditation and opportunities for participants to ask questions.

This workshop will conclude with a Conversation on Compassion with CCARE’s founder and director, Dr. James Doty. He will ask Yongey Mingyur Rinpoche and Richard Davidson about their life’s work and what role compassion has played.

About Mingyur Rinpoche
Yongey Mingyur Rinpoche is a rising star among the new generation of Tibetan Buddhist masters. With a rare ability to present the ancient wisdom of Tibet in a fresh, engaging manner, Rinpoche’s profound teachings and playful sense of humor have endeared him to students around the world. His first book, The Joy of Living: Unlocking the Secret and Science of Happiness, debuted on the New York Times bestseller list and has been translated into over twenty languages. Rinpoche teaches throughout the world, with centers on four continents. In early June, 2011, Mingyur Rinpoche left his monastery in Bodhgaya, India to begin a period of extended solitary retreat. In November of 2015 Mingyur Rinpoche returned after four years of solitary retreat. He is currently teaching his monastic and western students living around the world. Read more…

About Richard Davidson
Richard Davidson is best known for his groundbreaking work studying emotion and the brain. A friend and confidante of the Dalai Lama, he is a highly sought after expert and speaker, leading conversations on well-being on international stages such as the World Economic Forum, where he serves on the Global Council on Mental Health. Time Magazine named Davidson one of The 100 Most Influential People in the World in 2006. Read more…