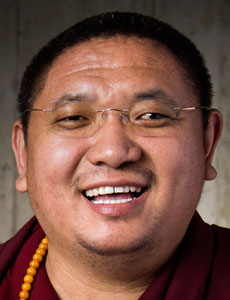 True freedom of mind is something we can discover for ourselves through the practice of meditation. In Tibetan Buddhism, the most direct and powerful way to experience this inner freedom is by exploring the nature of awareness, a journey that puts us in touch with a source of equanimity, wisdom, and compassion that we can access anytime and anywhere.

This practice retreat presents a rare opportunity to receive in-depth teachings on the nature of mind from Khenpo Kunga. The nature of mind teachings are drawn from the paths of Mahamudra and Dzogchen, the most profound meditative teachings of the Kagyü and Nyingma Schools of Tibetan Buddhism.

The teachings given at this retreat provide the transmissions needed to begin formal Buddhist practice in the Tergar Community, including “pointing out” teachings on the nature of mind, refuge vows (the vows to formally enter the Buddhist path), and the transmissions to begin practicing the Tibetan Buddhist foundational practices (ngöndro). This retreat is open to those who are interested in practicing Buddhism and who already have a strong background in meditation practice (see prerequisites below).

The daily schedule will include teaching sessions with Khenpo Kunga, as well as six to eight hours of meditation per day (practiced in twenty to thirty minute sessions). Mingyur Rinpoche will join us via video livestream from Nepal every afternoon. The retreat will also include periods of silence, group discussions, and opportunities to have individual interviews with Tergar Instructors and Facilitators.

If you would like to attend this retreat, you need to meet AT LEAST ONE of the following requirements:

As Mingyur Rinpoche has expressed his wish for the community to practice together, we are extremely happy to be able to honour this and offer this retreat with the guidance of Khenpo Kunga in person and Mingyur Rinpoche via livestream. We encourage you to discover this experience together with us.

Khenpo Kunga became a monk at a young age and began his education at Tergar monastery, where he studied the rituals, prayers, and other traditional practices of the Tibetan Buddhist tradition. At fifteen, he entered an extended meditation retreat and spent three years mastering the profound contemplative practices of the Kagyü lineage. Following this period of intense meditation practice, he entered the renowned Dzongsar monastic college near Dharamsala in Northwest India. After studying there for eleven years and receiving his Khenpo degree (roughly equivalent to a PhD), he taught at Dzongsar college for three additional years. Khenpo Kunga’s primary teacher is Yongey Mingyur Rinpoche, though he has studied with many other revered masters as well. In recent years, Khenpo Kunga has taught in Taiwan, Hong Kong, and the United States as one of the main teachers for the worldwide network of Tergar monasteries, meditation centers, and meditation groups.

Accommodations and Fee Structure:
The retreat will be held at the Dorint Hotel & Sportresort, Neuastenberg, Winterberg, Sauerland, Germany. Tergar retreat fees include retreat teachings only. You will need to arrange your hotel or other lodging, as well as your meals, separately. Space is available for families. We are looking into the possibility of providing childcare during the teaching sessions. If you would be interested in this, please email us at europeretreats@tergar.org.

Staying at the Hotel:
The Dorint hotel has prepared a document describing available room options and rates. This information is available in English and German. You can find this document at tergar.box.com/v/DorintInformation. Please review this document in advance to determine what room type you are interested in. When you are ready to make hotel reservations, use the registration form at this address: tergar.box.com/v/DorintRegistration. Complete the registration form and submit it directly to the Dorint Hotel. If you need assistance with accommodation information or registrations in another language, please contact the Dorint Hotel directly at Tel.: +49 2981 897-0 • Fax: +49 2981 897-700 • info.winterberg@dorint.com.

If your ability to pay makes it difficult to attend, contact us by email to europeretreats@tergar.org.

Payment:
Full payment is due at time of registration.

PLEASE NOTE: If you are interested in Awareness, Compassion, and Wisdom: Essential Teachings on the Joy of Living—taking place prior to the Nature of Mind retreat—you must register separately for that event. Click here for event details and registration link.

Cancellation Policy:
All cancellations will be charged a fee of €50.

Teacher Support:
Retreat fees include a modest honorarium to Khenpo Kunga and attendant lamas. You will also have the opportunity to make a personal offering to support Mingyur Rinpoche and his activities.

Arrival and Departure:
In order to attend the retreat, you must arrive no later than the opening day, July 10. It will not be possible to start your retreat later in the program. Check-in will be from 1:00 pm to 6:00 pm on the opening day of the retreat, followed by dinner at 6:00 pm. The retreat will end by lunchtime on July 16, 2017.

Precepts and Silence:
While attending this retreat all participants are expected to abide by the ethical precepts for lay practitioners. This includes abstinence from sexual activity. We will maintain periods of silence during this retreat, the length of which will vary so that there will be less silence in the beginning and end of the retreat and a period of complete silence in the middle.

Internet:
While it is possible to access internet at the hotel, we ask that – in keeping with the spirit of an intensive meditation retreat — you minimize internet activity, eliminating it altogether if possible.

The hotel Dorint Sportresort Winterberg is located in the heart of the Hochsauerland region.

Due to the mountain location you will find in and around the hotel area a lot of stairs. If you have any physical limitations that would make this difficult for you, please contact europeretreats@tergar.org prior to registration.

Transportation To and From Dorint Hotel:
Click here for more information on getting to the Dorint Hotel.

PLEASE NOTE: Due to the death of Mingyur Rinpoche’s grandfather, we have made a change to the program. Please view a video message from Mingyur Rinpoche about this change.