The present 12th Tai Situpa is a Buddhist master of the Karma Kagyu tradition. He was one of the closest students of the 16th Gyalwang Karmapa, and in turn became the main teacher of the current Gyalwang Karmapa, Orgyen Trinley Dorje. Situ Rinpoche oversees a vast network of Karma Kagyu monasteries, retreat centers, and Dharma centers worldwide, and has made great contributions toward training the next generation of Buddhist masters. He is also a scholar, poet, calligrapher, artist, author, architect, and geomancer.

Born in 1954 to a family of farmers in the Derge area of the Tibetan province of Kham, Pema Donyö Nyingche Wangpo was considered an emanation of the future Buddha, Maitreya. On the day of his birth, the entire region witnessed two solar orbs illuminating the sky. The details of his birth were completely in accordance with the prediction the 16th Karmapa made in a letter written after he had a vision concerning Situ Rinpoche’s rebirth.

The young Tai Situ Rinpoche was taken to Palpung monastery and at 18 months was enthroned there by the 16th Karmapa. At the time, it was acknowledged that he clearly recognized the attendants and disciples of his predecessor, the 11th Tai Situpa. At age six, due to deteriorating conditions under the Chinese occupation of Tibet, he fled Tibet into exile along with the 16th Karmapa and the 6th Mingyur Rinpoche. He travelled first to Bhutan and, after recovering from illness and exhaustion, rejoined the Karmapa at Rumtek Monastery in Sikkim. Situ Rinpoche then received his formal training from the Karmapa, Dilgo Khyentse Rinpoche, and many other great teachers.

In 1974, when he was 21, Situ Rinpoche went to Ladakh to take charge of two monasteries that had been offered to the 16th Karmapa. The following year, he assumed his traditional responsibilities by founding the Sherab Ling monastic center (near the town of Bir in the Indian state of Himachal Pradesh) at the request of his Tibetan students who had settled in northern India. In 1980, he made his first tour to Europe, and has since traveled widely, teaching Buddhist philosophy and meditation around the world.

In response to Western interest in multicultural activity and spirituality, Tai Situpa founded the Maitreya Institute, a nonsectarian forum for inter-religious dialogue, in 1983. The following winter, he returned to Tibet for the first time since his exile. He was invited to many monasteries of all Tibetan Buddhist lineages, where he gave teachings and empowerments, one of which was attended by over 100,000 people. During his visit, he also presented to the Chinese authorities a plan for the rebuilding, preservation, and propagation of Tibetan Buddhist culture.

In 1989, Situ Rinpoche lead the Pilgrimage for Active Peace to inspire people to work for world peace. A documentary was made of the event, which included an audience with Pope John Paul II, an exchange with the Benedictine monks in Assisi, prayers for peace on Mt. Shasta in California, and an interfaith dialogue in India with the spiritual leaders of the world’s main religions. Two years later, he returned to Tibet, where he ordained more than 1200 monks and nuns and transmitted a series of important teachings to the Buddhist community.

As a Buddhist master, Tai Situpa tours the world giving teachings and empowerments and offers long-term Mahamudra courses at Sherab Ling to guide students through the most profound of the Karma Kagyu teachings. In 2005, Tai Situpa transmitted the entire teachings of the Mahamudra lineage (which he had received from the 16th Karmapa) to the 17th Karmapa. 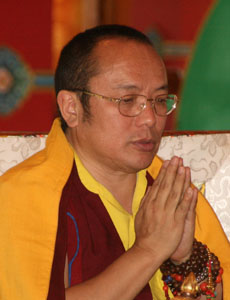 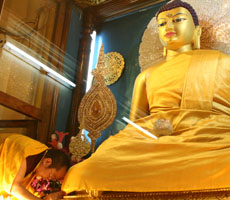 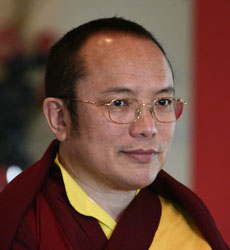 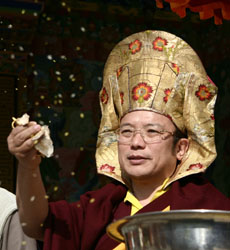