Nyoshul Khen Rinpoche (1932-1999) was a revered Tibetan meditation master, scholar, and poet, whose extraordinary presence and brilliant teaching style made a deep impact on the current generation of Tibetan lamas and on the transmission of Tibetan Buddhism to the West.

A principal lineage holder in the Rime (nonsectarian) movement of Tibetan Buddhism, Nyoshul Khenpo counted twenty-five teachers from all of the Tibetan lineages as his masters. Foremost, he was an authority on the teachings of the Nyingma master Longchenpa and the Longchen Nyingthig, a cycle of teachings that focus on revealing the mind’s fundamental nature of luminous purity. Rinpoche also mastered many of the highest practices of the other Tibetan lineages, including the Six Yogas of Naropa, Lamdre, Kalachakra, and Chod.

Nyoshul Khen Rinpoche was born in 1932 in the Derge region of Kham in eastern Tibet. His father was a roaming bandit who abandoned his family when Rinpoche was very young. His mother and paternal grandmother prayed over his crib that Patrul Rinpoche’s heart-disciple, Nyoshul Lungtok Tenpai Nyima, would come to teach and bless them.

Seeing that her young grandson was gentle and loving, his grandmother encouraged him to pursue the Dharma. At age five, his mother and grandmother took him to the nearby Sakyapa monastery, where he received his refuge name. Three years later, he officially enrolled there.

Demonstrating a serious commitment to the Dharma, Nyoshul Khen Rinpoche left the monastery at age twelve to seek instruction from a great lama named Rigdzin Jampel Dorje. Under the guidance of this master, he performed the preliminary practices (Tib. ngöndro). He then went on to complete the rigorous twelve-year scholarly training for the khenpo degree while undertaking the associated Mahayana and Vajrayana practices and solitary retreats.

At age eighteen, while living at Nyoshul Gompa, Nyoshul Khenpo received the profound teachings of Longchen Nyingthig, including the Great Oral Lineage of Pith Instructions. Echoing the prayers of his mother and grandmother, these teachings were transmitted to him by Nyoshul Lungtok Shedrup Tenpai Nyima. In the course of these transmissions, Shedrup Tenpai Lama introduced Nyoshul Khenpo to the nature of mind and became his root guru and foremost teacher.

When the Chinese cemented their occupation of Tibet in 1959, the twenty-seven year old Nyoshul Khenpo crossed the Himalayas into exile. He spent the next 25 years in India, gathering a wide range of experiences, living sometimes as a beggar.

In India, he received teachings from exiled Tibetan masters such as Dudjom Rinpoche, Dilgo Khyentse Rinpoche, and the 16th Gyalwang Karmapa. Later, these same lamas, as well as others (including Tai Situ Rinpoche, Pema Norbu Rinpoche, Sakya Trizin, and Dzogchen Rinpoche) invited him to teach at their monasteries.

In the early 1970s, Nyoshul Khenpo nearly died. His nervous system, severely affected by a stroke or possibly a poisoning, was so compromised that he became an invalid for several years. Advised by a Bhutanese master to take a wife and undertake longevity practice, he married Damchö Zangmo and the two made their home in Thimpu, Bhutan. There, he spent much of his time teaching, and co-authored Natural Great Perfection, a collection of inspiring Dzogchen teachings and spontaneous vajra songs.

In later years, Nyoshul Khen Rinpoche traveled to Switzerland for medical treatments. He then spent eight years living in southwestern France, teaching students there, and also traveling occasionally to the United States, Germany, and Britain. He passed away in Dordogne, France, in August 1999. 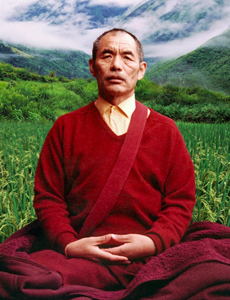 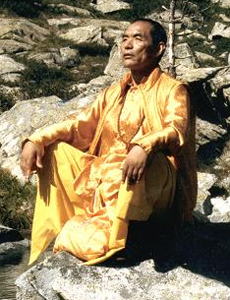 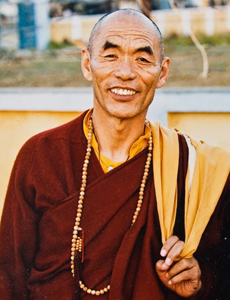