The word Karmapa means “one who carries out enlightened activity.” The Tibetan tradition holds that enlightened teachers are able to choose to be reborn in times and places that will allow them to bring great benefit to others. The Karmapas are the oldest line of such reincarnate lamas in Tibet, with successive Karmapas serving as the leaders of the Karma Kagyu lineage of Buddhism for over 900 years.

The current Karmapa, Ogyen Trinley Dorje, was born in eastern Tibet in 1985. Called Apo Gaga by his parents, he lived the simple life of a nomad until he was seven years old, when he was recognized as the reincarnation of the 16th Karmapa, Rangjung Rigpe Dorje. He was located with the help of a letter left by the 16th Karmapa, which indicated where and when he would be born, the names of his parents, and special signs that would accompany his birth. In the same month that he was found, His Holiness the 14th Dalai Lama reported a dream that described the area where the young Karmapa had been born, confirming the details of the prediction letter.

Upon being confirmed as the 17th Karmapa, he was enthroned at Tsurphu Monastery, the historic seat of the Karmapas in central Tibet, where he was received by nearly 25,000 Tibetans who had gathered to pay their respects. At Tsurphu, the Karmapa studied Buddhist texts and the rituals of the Kagyu lineage, as well as Tibetan language, poetry, and art. He also received hundreds of visitors each day, many of whom traveled from all over the world to meet the young lama.

Though the Chinese government, which has occupied Tibet since 1950, initially supported the recognition of the Karmapa, they closely monitored and severely curtailed his activities. These restrictions created a barrier to the young Karmapa’s education, since most of the senior teachers of the Kagyu lineage lived in exile outside of Tibet and were not allowed to visit him to transmit the vital teachings of his tradition. In such circumstances, the Karmapa was also unable to meet with the vast majority of his students from across the globe.

In 1999, the fourteen-year-old Karmapa made a daring escape from Tibet that caught the attention of the world. After months of careful planning, he pretended to enter a solitary retreat, but instead donned civilian garb and snuck out of the monastery through an upstairs window. Leaving Tsurphu with a handful of attendants, he began a daring journey by foot, horseback, car, train, and helicopter, a trip that made its way into global headlines. Upon arrival in Dharamshala, India, on January 5, 2000, he was welcomed by His Holiness the 14th Dalai Lama. Shortly thereafter, he received refugee status from the government of India.

Since 2000, the Karmapa has continued to live near Dharamshala. Every year he travels to Bodhgaya and Sarnath, two important Buddhist pilgrimage sites, to offer teachings and preside over the annual ceremonies and celebrations of the Karma Kagyu lineage, which draw thousands of participants from around the world. In 2008, he received permission to travel to the USA for the first time to teach his students in the West.

Though still in his twenties, the Karmapa is an extraordinary spiritual teacher. In addition to his role as head of the Karma Kagyu lineage, he is a gifted painter and poet, a passionate environmentalist, and an outspoken vegetarian. His tireless efforts to uphold the teachings of Tibetan Buddhism are breathing new life into this ancient tradition.

For addition information on the 17th Gyalwang Karmapa, see:

Time Magazine article on the Karmapa

The Karmapa’s advice on the environment 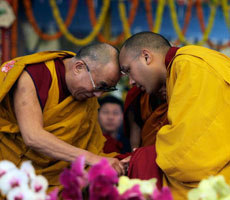 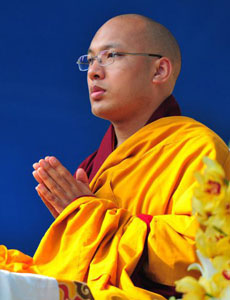 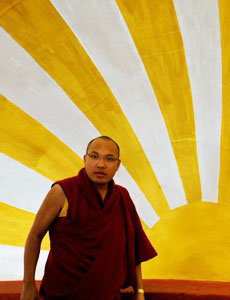